Guan Yu Zhou is a Chinese FIA Formula 3 Racing Driver, racing for Prema Powerteam and is a Ferrari Driver Academy member since 2014. MDM Designs have been designing Zhou's helmet since the 2014 season.

Zhou has been a regularly returning helmet design customer of MDM Designs, he contacted us in the build up to the 2017 Season shortly after confirming his plans for the season. The previous helmet for Zhou featured a mixture of blue chrome, white, silver chrome, red and yellow - with two helmets that differed slightly in certain colour fills. This years request was again for two helmets, with slight differences - however the colour scheme was up for debate.

After a few discussions decided on colours, we designed up a few concepts for the side view of the helmet. The main design was not to be revolutionised, more of an evolution of his previous design - simplifying some areas whilst still keeping the detail within the design up close. (Such as his name repeated in the main side section of the design and his now trademarked Zhou logo which we created in 2015)

When the initial concepts were done, the direction to go in was then clear - by teaming up the colours of Ferrari and the national colours of his native China, the choice for a mainly red and yellow helmet was a clear winner! The design stood out really well mixed in with white sections in the upper and lower parts of the helmets, teamed with red chrome sections around the bottom of the helmet and top of the rear spoiler to create a nice contrast in the reds.

Various airbrush details were added into the red to provide some depth and detail up close, without dominating the colour and losing the impact of the red. The Ferrari Driver Academy logo was placed in the mandatory position above the visor and in the centre of the rear spoiler. Zhou's personal sponsors were included into the white section at the top of his helmet, fitting in nicely with the abstract shape. The famous Shanghai skyline was a personal request to be added into the rear of the helmet within the white band that runs across the middle of the helmet, just underneath his name in Chinese.

Lastly, Zhou decided on having the iconic 'Prancing Horse' on the top of his helmet, as the centre piece in the middle of the red top. The emblem was then surrounded by stars from the Chinese flag to further combine the Ferrari and China link.

When the final design was confirmed, the second version was created by essentially swapping the red fluorescent base colour with the red chrome, as well as swapping silver chrome outlines on the white areas to a fluorescent yellow. This meant two helmets of the same design, but with different colour-schemes, for different occasions.

Yens Helmet Design and Paint were sent the confirmed designs and the vectors required to complete the paintwork. The final result is visible below on the bare Bell HP7 Carbon shells, as well as the fully assembled helmet in the pictures within this Project post.

Zhou's design are always some of the most challenging helmets to design, however the final results were defiantly worth the hours - as he has already taken multiple podiums in the FIA Formula 3 European Championship this season. 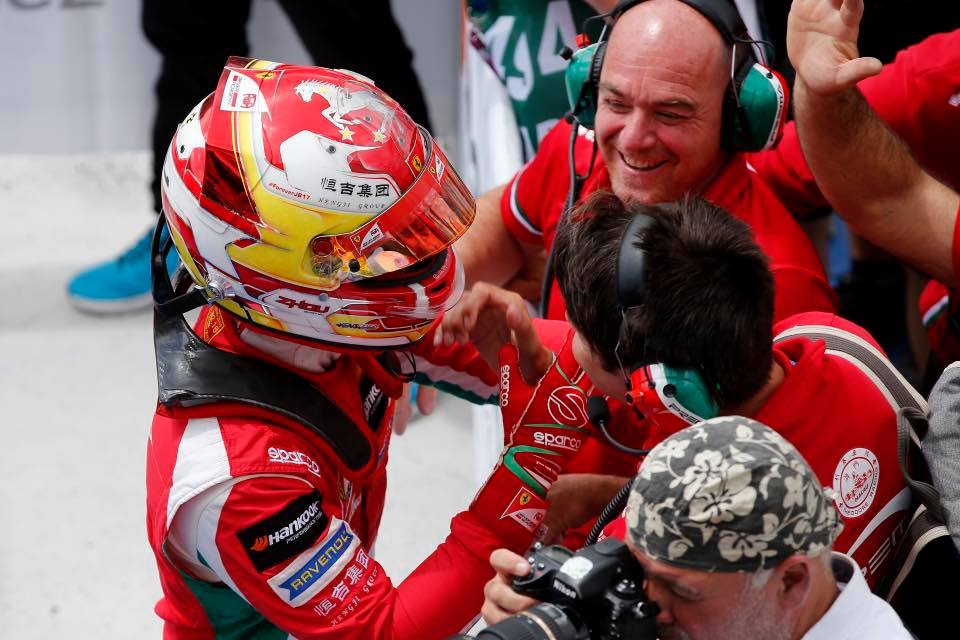 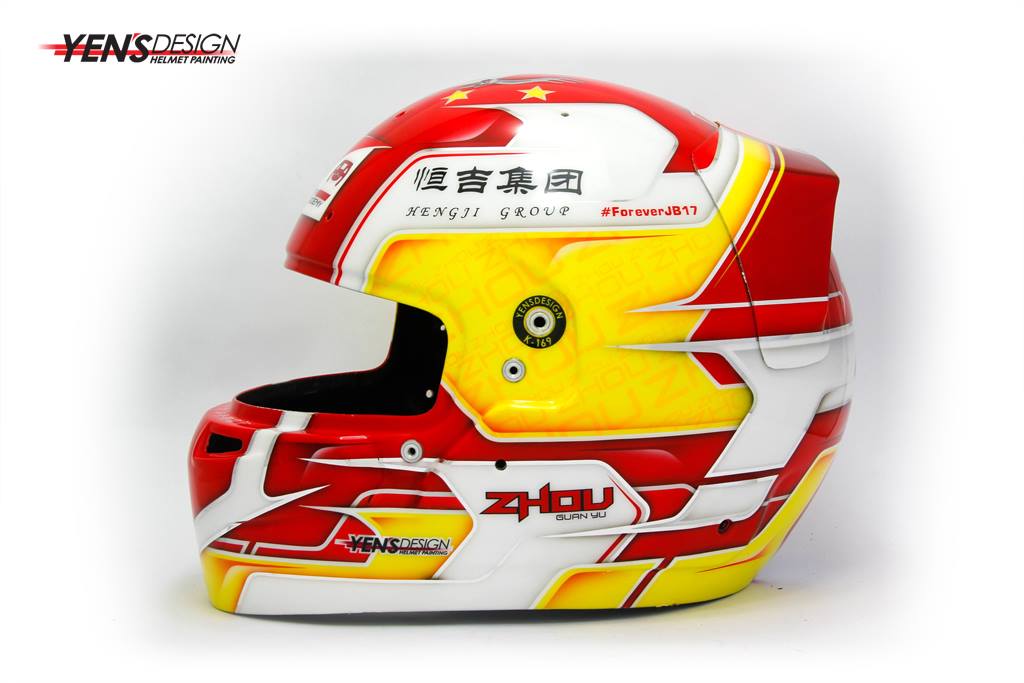 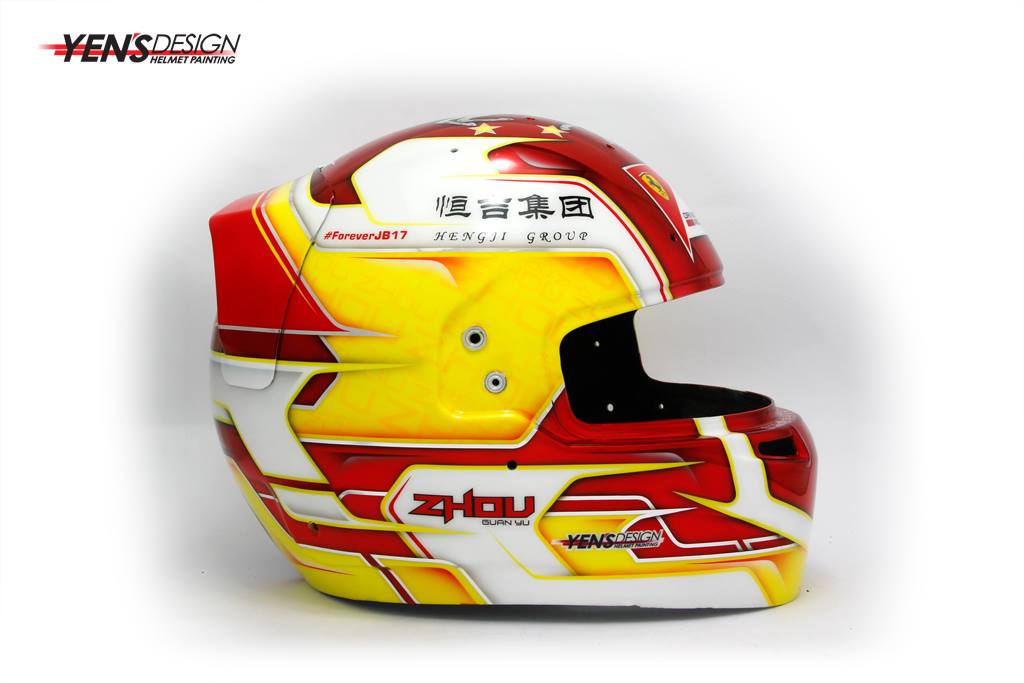 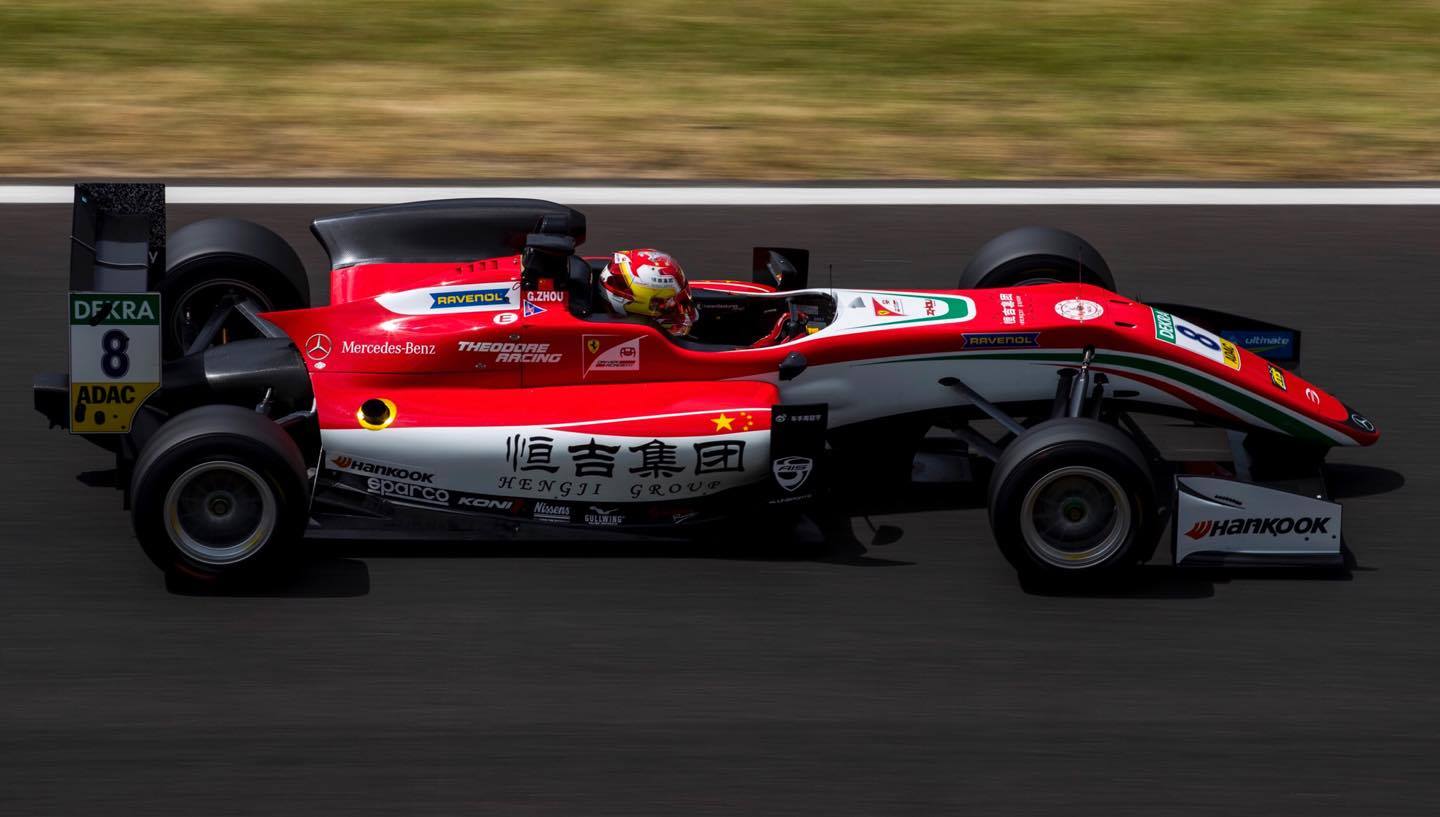 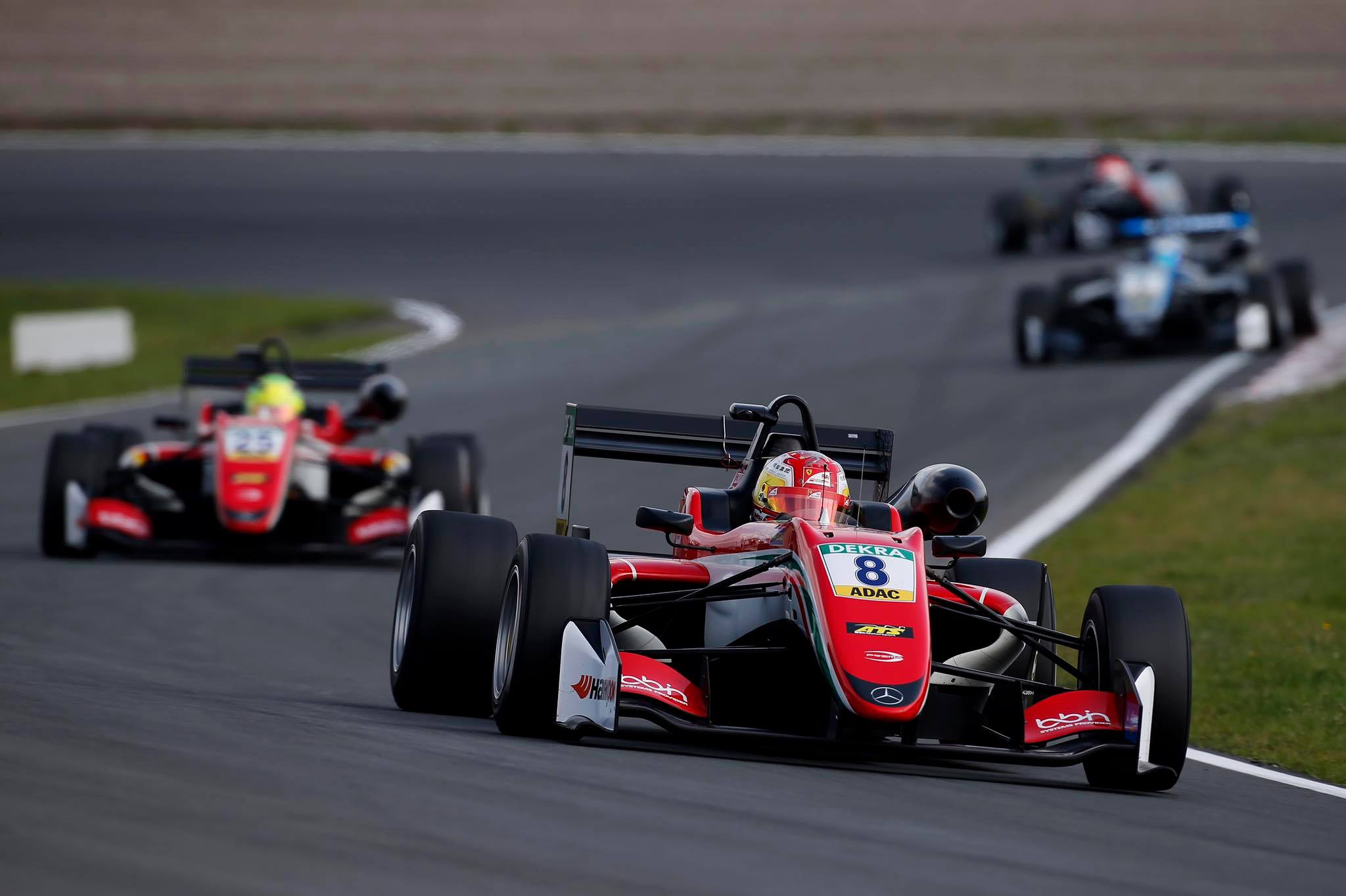 Red meets @team_quadrant for @landonorris ‘ #TurkishGP helmet this weekend 🇹🇷 Red over carbon, with a red camo to complete the look - alongside his trademark fluo yellow ✍🏻 Paintwork by @jmd_helmets 🎨 Design by @mdm_designs ✍🏻 3D rende...

It’s been a lonnngggg time since we did one of these! So here goes... Throwback Thursday featuring tomorrow’s birthday boy @landonorris , with his 2018 @carlinracing tribute helmet, that he wore at the final race of the @fiaf2championsh...

Three Italian @F1 races = three helmet designs for @landonorris ! Colours of the Emilia-Romagna & Italian Flag, with a mix of chrome gloss and matte white around his standard design 🇮🇹 Design by @mdm_designs ✍🏻 Paintwork by @jmd_helmet...

3D low poly @georgerussell63 helmet design, ready for the return of Imola! 🏎 Adding some depth to the background with a metallic silver effect, working alongside his traditional red and blue metallic highlights ✍🏻 Paintwork by @bellrac...

3D low poly @georgerussell63 helmet design, ready for the return of Imola! 🏎 Adding some depth to the background, to work alongside his traditional red and some blue chrome highlights ✍🏻 Paintwork by @bellracinghq 🎨 Video by the man hi...

American Red Bull Junior @jakcrawfordracing has also been smashing it with teammate Jonny Edgar in Italian and ADAC F4 🔴🐂 We managed to carry over the Stars and Stripes, as well as the flame on top from his karting helmets into his Red ...

Portimao special for @landonorris 🇵🇹 His traditional yellow fluo, adding in elements inspired by the ‘Rooster of Barcelos’ - a well known symbol of Portugal, which gives some serious Nando’s vibes through the carbon sections 😅 Design b...

@jonny_edgar has been putting in some wet weather masterclasses in F4 with @vanamersfoortracing 👌🏻 That fluo orange and a twist on his traditional family layout certainly helps pick him out on track 🔴🐂 Swipe for design views and 📸 in a...

Red returns at the Nurburgring for @georgerussell63 at the #EifelGP 🏎 Bold red layout, with a subtle dazzle pattern to lift the background, throwing back to the initial design he had at the start of the season 🔴 Swipe for more views an...

Day and night mode in this @alfaromeoracing concept. One car with their usual white and red theme, alongside a black version that references the dark theme of their ‘shakedown’ liveries. Could we see a famous surname driving something like this in 202...

Following up on the split livery concepts, here is a 2022 Aston Martin version British Racing Green and their 24 Hours of Le Mans colours, with some BWT pink highlights if they remain on the car It would certainly add a more colour to the grid, but wo...

Who would love to see the possibility of split liveries within teams in the future of F1? The @AlphaTauriF1 would be a perfect example with their two tone colour palette - mixing gloss and matte, whilst sticking with brand guidelines and confusing some...

Gold special helmet for @salihyoluc for the 2020 @24heuresdumans 🏎 Featuring elements to match the car we designed for @tf_sport 🇹🇷 Paintwork by @jmd_helmets 🎨 Swipe for design view and photos by Salih 📸 #mdmdesigns #helmetdesign #2...

Second driver and the second time one of our helmet designs have scored an @F1 podium 😁🥉 Thank you @Alex_albon 🙏🏻 Brilliant drive! #TuscanGP https://t.co/MoRAuBiCIo

Yes Alex!!! Third time lucky, but you finally got that podium you have deserved since Brazil 💪🏻 Delighted for you! Awesome to get another driver with our helmet designs scoring a podium 🥉💪🏻 Enjoy the celebrations 🤘🏻 #mdmdesigns #helme...

Get in there @alex_albon ! Maiden podium 🥉 Delighted for you mate 👏🏻 https://t.co/q7ZUor1Dyp

Big congratulations to @oscarpiastri ! Back-to-back titles 💪🏻 You could have made it a bit more comfortable and less tense 😅 @FIAFormula3 Champion! Enjoy it 👌🏻 Gutted for @logansargeant not getting a chance to battle it out in the fi...

Congratulations @OscarPiastri ! Back-to-back titles 💪🏻 You could have made it a bit more comfortable and less tense 😅 @FIAFormula3 Champion! Enjoy it Clearly it is the go-faster helmets 😉 https://t.co/ozwyxX25he

Mugello helmet design for @landonorris 🏎 Italian flag visible from the onboard camera 🇮🇹, with a matte chrome colour combination - plus the circuit corner names handwritten into the background of the helmet ✍🏻 Paintwork by @jmd_helmets...

Seb is signed! Now let’s just hope @AMR_Official bring some green back to @f1 🙏🏻 Especially on the simple and stunning 2022 cars 😍 Cannot wait for those! https://t.co/xsIc7Fdcne

Chef’s kiss for Monza 👨‍🍳 Special pizza design for @landonorris , going for a half & half seperated by the Italian Flag 🇮🇹 Really chuffed how this came out! Full credit to Lando for the late call on the pizza base idea 👌🏻 Swipe for de...

Italian Special Helmet Design for @georgerussell63 at Monza and Mugello 🇮🇹 The Italian flag fills the abstract brushstroke on either side, with matching hans posts and visor bolts by the guys @bellracinghq 👌🏻❤️💚 Hopefully it helps to p...

2020 lid for @asuttonracing ✍🏻 @rennatdesign nailed the paintwork on this and Ash is doing the absolute business on track in @btcc as always 👌🏻 Ash evolved his previous layout, whilst keeping up the branding direction and bold colour...

Silverstone #F170 design for @alex_albon ✍🏻 . Added in some white to reflect the colours of the Thai flag, alongside adding in the some F1 70 branding throughout to commentate the special event 🏎 . Paintwork by @massimomamodante_mad56 🎨 ...

#BritishGP Helmet for @georgerussell63 🇬🇧 . It’s not as cute as the design Eva did for @landonorris but I tried 😅 . Big credit to George for the brilliant social post 👏🏻 . Swipe for photos of the finished helmet and other design views 👉🏻...

Black, pink and mean revised livery for the 69 @RamRacingCom Mercedes-AMG GT3 EVO, for the opening round of @BritishGT this weekend at @Oulton_Park 🏎 Best of luck guys! https://t.co/2MdlJmvr6G

2020 helmet of today’s birthday boy @maxfewtrell ✍🏻 . A fluo yellow update to his previous helmet and onto the @bellracinghq HP77 for his second year in @fiaf3 . Swipe for more views and the helmet in action 👉🏻 . #mdmdesigns #helmetdesi...

Budapest edition for @landonorris 🇭🇺 . Lando mixing it up once again, adding in Floral Hungarian folk art added into the blue, with the camo retained from the helmet that took him to his maiden podium - plus the Heroes Square on the rear...

Fresh white and brushstroke look for @georgerussell63 hitting the track this weekend 🖌🇭🇺 . George is also paying tribute to the incredible efforts going in by the doctors and nurses at the NHS, throughout this challenging time in all of ...

You’ve come a long way @landonorris since we have known and worked with you 🏎! . Absolutely chuffed for you bagging your first podium, with the fastest lap on the final lap of the race! 🥉 . Mega job little man! Also to all the guys at @a...

Back to school special for @landonorris at the #AustrianGP 🇦🇹 . Retaining the dazzle camo from testing, this time in chrome - with the Styrian mountains ghosted into the blue, referencing the starting point of the 2020 season 🏎⛰ . Design...

F1 is two days away! So here’s colourway number 2 of @alex_albon ‘s 2020 helmet design - swapping the 💛 and ❤️ around, which he previewed at the Silverstone Shakedown last week 🏎 . Swipe for photos and design views 👉🏻 . Photos by @gettyi...

Evolved layout for @fhabsburg62 in his second season of @dtm_pics - this time with @audisport @followwrt 🏎 . Keeping his trademark abstract artistic layout, but with a cold colour palette fade down the helmet - giving those Hakkinen styl...

Good luck to the guys @2seasmotorsport for the #lemans24virtual , after qualifying a mega P3 on the grid for the main event tomorrow 🤞🏻 . We converting the chrome and matte mix McLaren 720S GT3 we designed earlier this year over the Orec...

Serious #throwbackthursday back to 2014 👀 . The first full season we worked with two young British racing drivers, rising through the ranks and had a dream to make it into @f1 ... Wonder what happened to those two? 😅 @georgerussell63 @la...

Awesome to see live @indycar racing make a return over the weekend! We can see the light at the end of the tunnel now for motorsport and some normality to return 🙏🏻 . Awesome drive by @conordaly22 in the @gallagherglobal @carlinracing , ...

Mega job by @ConorDaly22 and @CarlinRacing for smashing out a P6 first race back 👏🏻 So good to see @IndyCar back on track 😍 https://t.co/vlrKDxOMhT

Keeping true to his original layout, but still some tweaks for @jakedennis19 in 2020 👀 . The yellow might be gone , but the bold recognisable red and black remain - along with a pretty trick top layout and ghosted @astonmartinracingoffic...