Arden Motorsport was established by Garry Horner and Christian Horner. Arden has become one of the most successful British Racing Teams - competing in the British F4, Formula Renault 2.0 Eurocup, GP3 and FIA Formula 2 Championships.

Arden contacted us in December 2016 about revamping their new website. The main push being to make the website simple and easy to use, maintain and update - whilst displaying plenty of on track imagery without compromising the performance of the website.

The colour scheme was decided to follow in the Arden Grey used in the team transporters to allow the images to stand off the body of the website well, allowing for clear text and clean blending into the content of the website.

A series of concept proposals were made in order to get the design of the website confirmed at the beginning of the project in order to ensure all parties involved were happy with the layout before the building of the website commenced. The site was created with a test domain and went live in time for the start of all four of their championships - ready for a busy 2017 season.

Each Arden driver has a driver profile, with links to their social platforms which are Conditionally Visible depending which driver has what platform.
Press releases are contained within the page of each respective championship, which are added and edited with a Content Management System so both their Team Co-Ordinators can add news updates, change images and on-screen edit content whenever required.

Arden have a great history, so a Roll of Honour was added to include some of their past drivers and champions - who have gone onto achieve results in Formula One, WEC, Formula E and other series at the pinnacle of motorsport.

The result was a fully responsive and clean website, which has led to a ever growing partnership with Arden Motorsport - such as their sister company the 'YRDA - Young Racing Driver Academy' and 'The Business of Sport' as well as a range of Arden Motorsport and YRDA Drivers.

Stay tuned for more updates on more up and coming projects with Arden Motorsport, YRDA and their drivers. 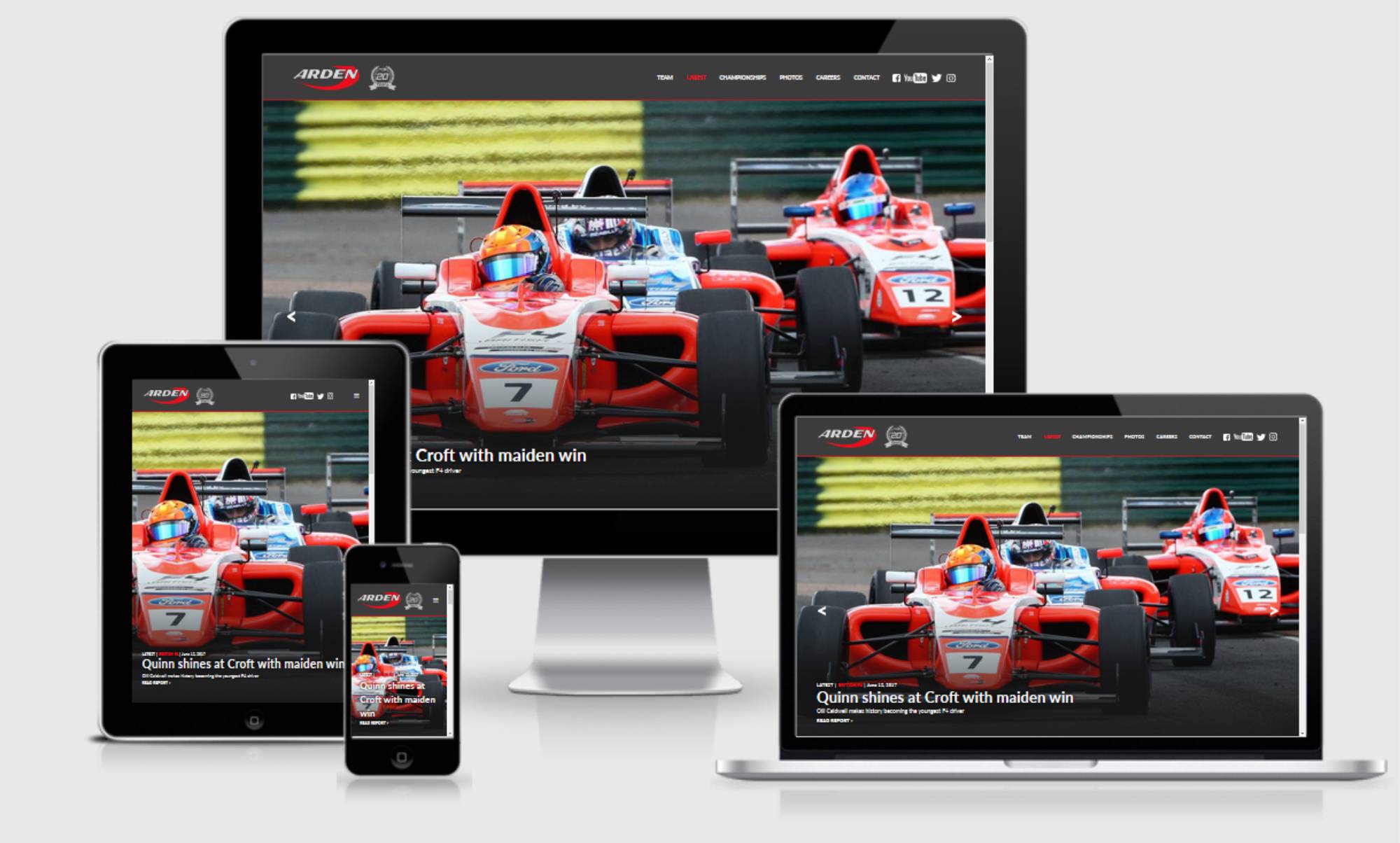 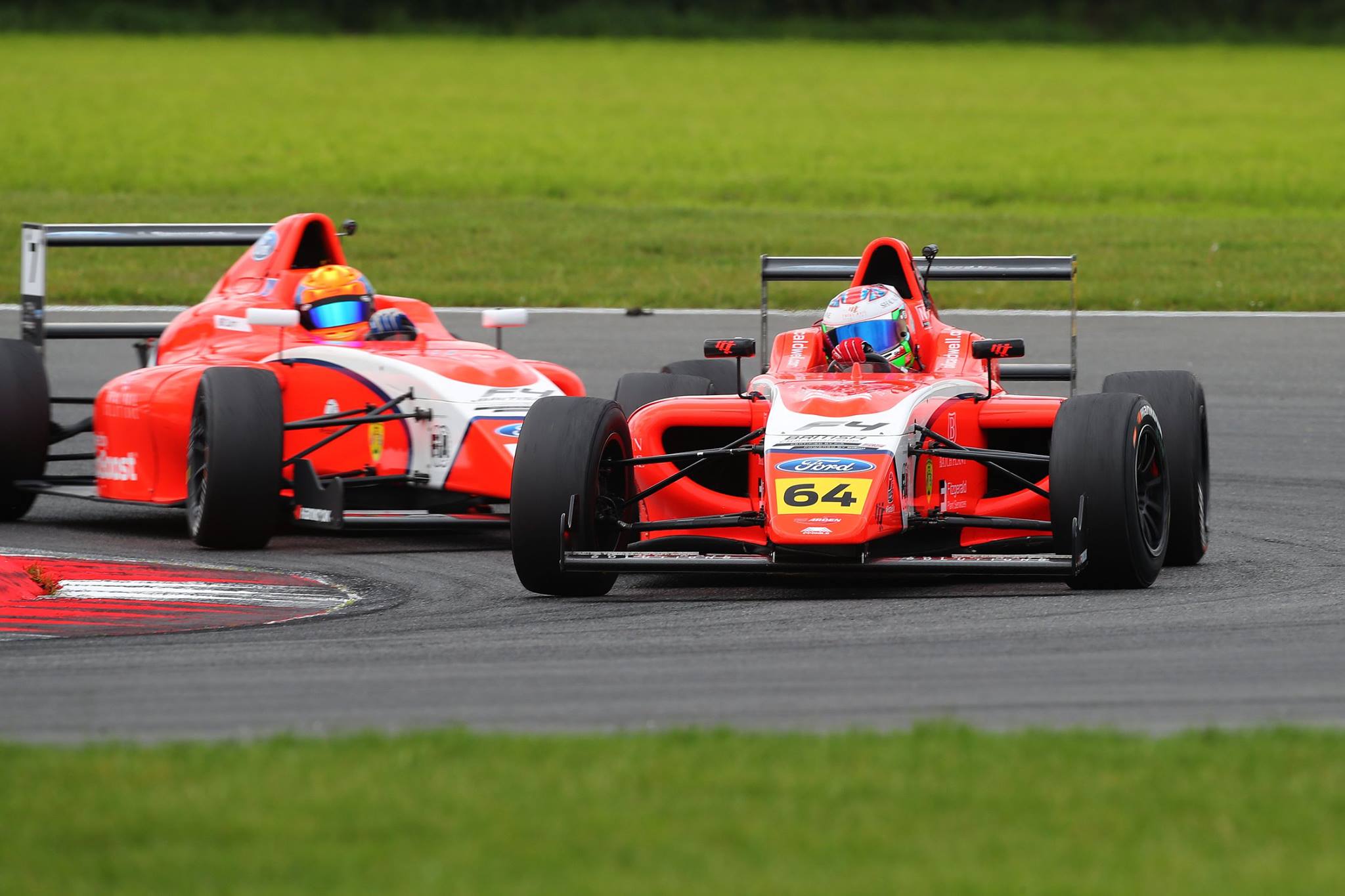 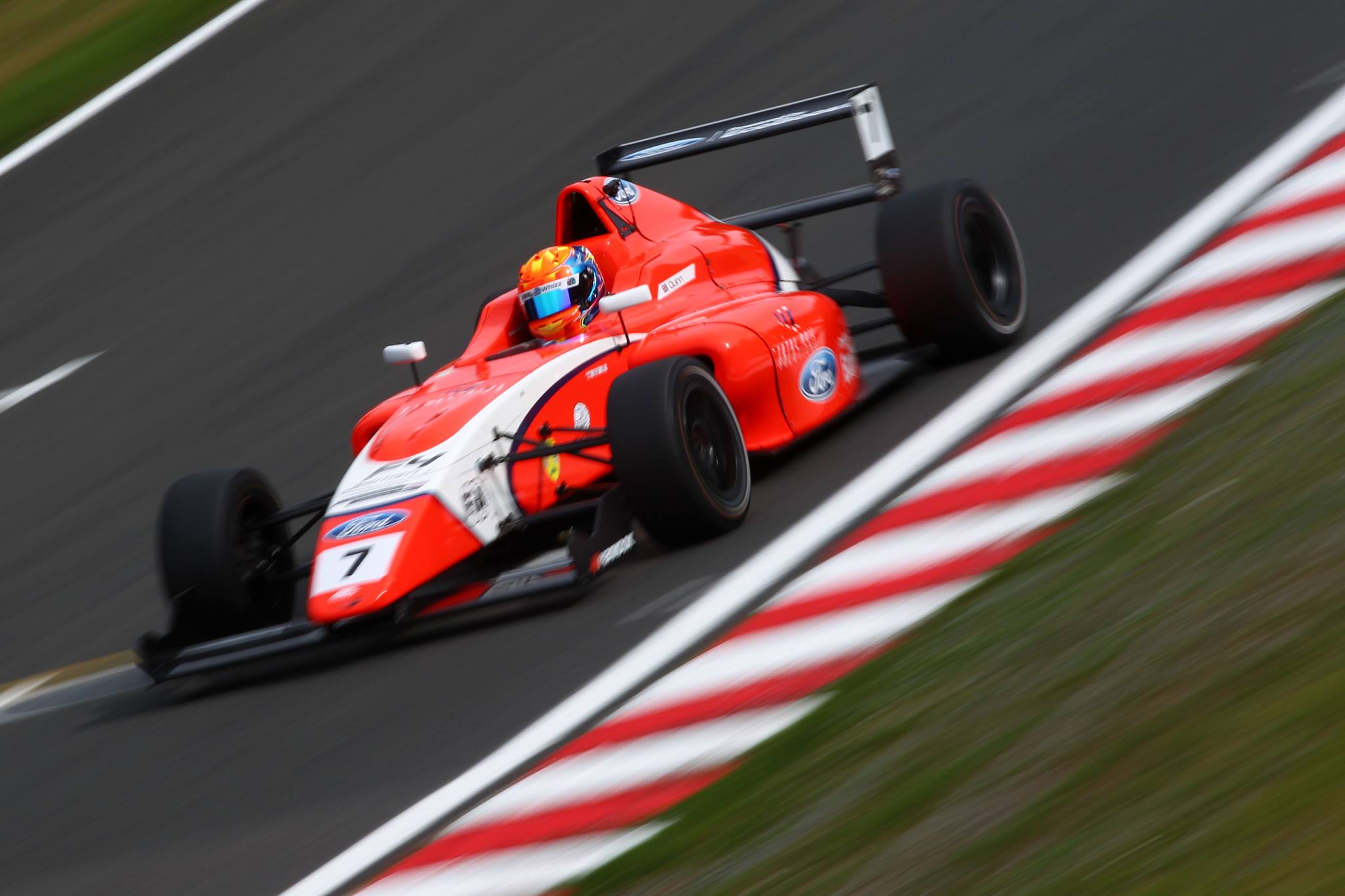 Glitter ready for @landonorris under the light of Bahrain ✨ Subtle @mclaren papaya spark detailing and a @team_quadrant placement too, as we get the @f1 2021 season underway! ✍🏻 Paintwork by @jmd_helmets 🎨 📸 by @motorsport.images #L4...

#ThrowbackThursday @f1 is back tomorrow, for a record 23 race season 🏎 Lots of races, lots of special helmets to come! So our job is to make them better than we did last year 👀 That means we have to top the @georgerussell63 @william...

2021 season design for reigning @fiaf3 Champion @oscarpiastri - as he steps up to @formula2 with @prema_team 🏎 Upping the brightness level this year, to bring his layout more inline with his original karting helmet designs ✍🏻 One versi...

Catching up on loads of social posts we should have done weeks ago, but never had the time 🙃 Here is the unmissable green @sachafenestraz helmet design for his @jaguarracing @fiaformulae Reserve Driver duties 🏎 Punchy green, red, black...

Crispy white and chrome mix for @nickcassidy_ 💎 Keeping the layout loyal to the one he has has throughout his career, using chrome Maouri and dark blue - as he races with @envisionvirginracing for his maiden season of @fiaformulae 🏎 Pa...

Glitchy testing special for @landonorris 👀 Falling in line with the latest merch that dropped, a glitchy twist on his 2021 design has been created for Bahrain Pre-Season testing ✍🏻 Check out the video on @mclaren where Lando chats abou...

FIA Formula E is back! Here is a collection of drivers, who we were lucky enough to have ask us to design their helmets for Season 7 ✍🏻 In what has to be the most competitive grid in single-seater motorsport, we are lucky to have 4 race...

Mexico fever for 2021 as @schecoperez joins @redbullracing 👀 Glad to have brought back his favourite colours into his design, with Mexico Aztec elements through the background of the helmet 🇲🇽 Swipe for more design views and photos 👉🏻 ...

New @sd_sealants livery for @teamparkerracing - as they switch to @porscheracesgb for the 2021 @british_gt season 👀 This will sound as beastly as it looks, when it hits the track with @scottmalvern and @8_naj at the wheel 🏎 Amazing job...

2021 helmet design for @landonorris 🥎 Keeping the brightest helmet on the grid, with small mods to last seasons helmet - such as blue over carbon and a larger @team_quadrant presence on show 👀 First of many different layouts for the 20...

New 2021 colourscheme for reigning PRO-AM @british_gt champions @ramracingcom with Ian Loggie and Yelmer Buurman at the wheel 🏎🔥 The livery is in the colours of @cureleukaemia - helping to raise awareness for this great cause and the To...

Fresh 2021 helmet design for @nicolashamilton ✍🏻 Mainly black and white to suit both @rokitofficial and @monsterenergy He has kept the traditional Hamilton ribbon style, as he joins he brother in using @bellracinghq helmets for this s...

New @officialwrc helmet for @hmsgofficial driver @craigbreen__ 🇨🇮 An evolution of his old karting helmet, designed to fit the new @bellracinghq HP10 Rally ✍🏻 Photos by Craig - check it out in more details on his profile 👍 #mdmdesigns ...

It’s always cool to see a helmet design last the test of time for a driver ✍🏻 @jackdoohan keeps the iconic design of his father @micksdoohan into a third season 👌🏻 The design is basically unchanged from the last two seasons 🏎 Swipe fo...

Second @fiaformulae helmet design for @jakedennis19 ✍🏻 White version with a flipped colourscheme to give him a choice for both races in the double header 😉 Paintwork and photos by @rennatdesign 🎨📸 #mdmdesigns #helmetdesign #bmw #fiafo...

Throwing back to this @bathurst12hr banger of a livery we did for the @r_motorsportracing @astonmartinracingofficial Vantage, with @castrolracingau last year 👀 One of our personal favourite liveries we have designed so far ! ✍🏻 Apologi...

2021 helmet design for @oliverrowland1 - ready for Season 7 of the @fiaformulae Championship 🏎 The brightest helmet in FE just got a bunch brighter with more fluo red to accompany the yellow 👌🏻 Paintwork by @diadesign_ 🎨 See Oliver’s ...

Huge congratulations to @2seasmotorsport , @ben_barnicoat and @martin.kodric for winning the @gulf12hours in dominant fashion this weekend 🏆 Mega to see that blue chrome beauty take the first P1 of the season, with two MDM helmets on th...

Huge thank you to all our clients who have made such a weird 2020, so memorable for us! Drivers and team that we work with have scored some incredible results that genuinely make you realise what a cool and unique job you have! Even if...

2020 gave us an incredible opportunity working with @racingpointf1 We created their new website, for which turned out to be an incredible season for the team! They secured their maiden victory with @schecoperez and pole position with @...

We wish everyone a very Merry Christmas! 🎄 As well as a special thank you to all of our followers, drivers, teams, clients and partners, for making a crazy 2020 season so rewarding! 🙏🏻 Enjoy the festive break! We will be back sooner ...

End of season special for @alex_albon ✍🏻 His normal layout, but with a @mamo_mad56 comic style twist 👀 The idea came from an idea Massimo trialled a few weeks ago, and @redbullracing gave us permission to use this theme in Alex’s Abu D...

3D chrome with something a little different for @landonorris at the @F1 finale Standard design for the season was 3D chromed by @jmd_helmets to get that amazing raised finish 🎨 @vazarely then finished it off ready for @ymcofficial 🏎 ...

A special tribute helmet by @georgerussell63 to Sir Frank and Claire Williams @williamsracing 💙 George’s 2020 layout, in Williams dark blue matte and matte glitter, decorated with all the championship winning cars on the top - in a clas...

That was your race 💔 But you showed the world, what we have always known from day 1! George Russell is the real deal, and it is only a matter of time ⭐️ Still, huge congratulations to @schecoperez and our friends at @racingpointf1 for...

Sakhir Grand Prix Helmet for the man of the moment, @georgerussell63 ♥️ The design is the same that we designed for his Mercedes duties last season, and the one he used in the post-season Abu Dhabi test last season. Good effort by @bel...

You saw a cheeky preview last weekend live on the @team_quadrant stream, but here is the on-brand helmet being used by @landonorris this weekend at @bah_int_circuit 👀 Design featuring design elements worked into the development of the Q...

Huge congratulations to now 2x British Touring Car Champion @asuttonracing 💪🏻 Absolutely brilliant all season! Big thanks for taking another one of our helmet designs to the big W 🏆👏🏻 #AS1 #BTCC #mdmdesigns @btcc

Season 7 @fiaformulae helmet for @jakedennis19 , as he makes his debut as a @bmwmotorsport driver 🔵⚫️🔴 Evolution again of the design he’s had since his karting days, with BMW San Marino blue taking over as the background colour 🏎 Paint...

Red meets @team_quadrant for @landonorris ‘ #TurkishGP helmet this weekend 🇹🇷 Red over carbon, with a red camo to complete the look - alongside his trademark fluo yellow ✍🏻 Paintwork by @jmd_helmets 🎨 Design by @mdm_designs ✍🏻 3D rende...

It’s been a lonnngggg time since we did one of these! So here goes... Throwback Thursday featuring tomorrow’s birthday boy @landonorris , with his 2018 @carlinracing tribute helmet, that he wore at the final race of the @fiaf2championsh...

Three Italian @F1 races = three helmet designs for @landonorris ! Colours of the Emilia-Romagna & Italian Flag, with a mix of chrome gloss and matte white around his standard design 🇮🇹 Design by @mdm_designs ✍🏻 Paintwork by @jmd_helmet...

3D low poly @georgerussell63 helmet design, ready for the return of Imola! 🏎 Adding some depth to the background with a metallic silver effect, working alongside his traditional red and blue metallic highlights ✍🏻 Paintwork by @bellrac...

3D low poly @georgerussell63 helmet design, ready for the return of Imola! 🏎 Adding some depth to the background, to work alongside his traditional red and some blue chrome highlights ✍🏻 Paintwork by @bellracinghq 🎨 Video by the man hi...

American Red Bull Junior @jakcrawfordracing has also been smashing it with teammate Jonny Edgar in Italian and ADAC F4 🔴🐂 We managed to carry over the Stars and Stripes, as well as the flame on top from his karting helmets into his Red ...

Portimao special for @landonorris 🇵🇹 His traditional yellow fluo, adding in elements inspired by the ‘Rooster of Barcelos’ - a well known symbol of Portugal, which gives some serious Nando’s vibes through the carbon sections 😅 Design b...

@jonny_edgar has been putting in some wet weather masterclasses in F4 with @vanamersfoortracing 👌🏻 That fluo orange and a twist on his traditional family layout certainly helps pick him out on track 🔴🐂 Swipe for design views and 📸 in a...

Red returns at the Nurburgring for @georgerussell63 at the #EifelGP 🏎 Bold red layout, with a subtle dazzle pattern to lift the background, throwing back to the initial design he had at the start of the season 🔴 Swipe for more views an...

Day and night mode in this @alfaromeoracing concept. One car with their usual white and red theme, alongside a black version that references the dark theme of their ‘shakedown’ liveries. Could we see a famous surname driving something like this in 202...

Following up on the split livery concepts, here is a 2022 Aston Martin version British Racing Green and their 24 Hours of Le Mans colours, with some BWT pink highlights if they remain on the car It would certainly add a more colour to the grid, but wo...

Who would love to see the possibility of split liveries within teams in the future of F1? The @AlphaTauriF1 would be a perfect example with their two tone colour palette - mixing gloss and matte, whilst sticking with brand guidelines and confusing some...

Gold special helmet for @salihyoluc for the 2020 @24heuresdumans 🏎 Featuring elements to match the car we designed for @tf_sport 🇹🇷 Paintwork by @jmd_helmets 🎨 Swipe for design view and photos by Salih 📸 #mdmdesigns #helmetdesign #2...